In this vibrant collection of thirteen tunes, Laura Fernandez offers a body of deeply true statements about the way she feels and perceives. Comparable to Joni Mitchell’s BLUE, Carole King’s TAPESTRY, or Lucinda Williams’ CAR WHEELS ON A GRAVEL ROAD, this is wholly personal album from the heart, a work primarily about emotions and feelings. Many of the songs here express hurt and pain; the album unfolds like a life journey to a place of understanding, hope, joy, imagination, courage and wonder.

Laura Fernandez is an exceptionally natural songwriter. Her unforced melodies spring from her words, and they emphatically belong with each other. Laura’s voice is warm and rich and expressive, and makes you believe every word she sings.

Laura Fernandez has blended pop, jazz and even classical influences. There are many different styles and grooves, a richness of textures. Each number flows and ‘breathes’ in its own unique way, always led by and shaped around Laura’s fluid, feeling piano, and vocal, followed by an expert rhythm section. String accompaniment adds lush embellishment on several tracks. Guitar, trumpet, even mandolin add to the sonic richne 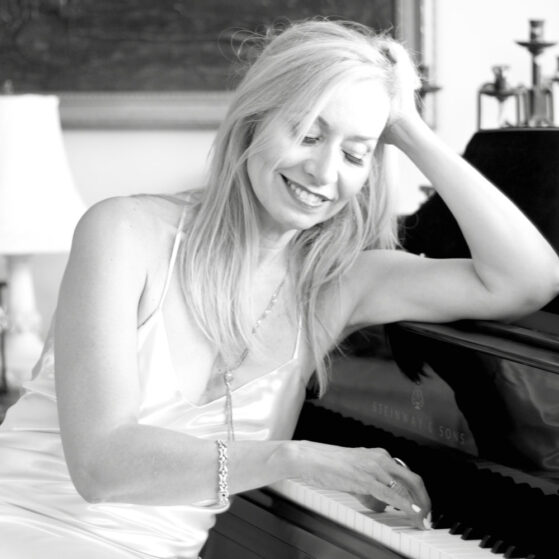 “Okay, Alright,” was a labour of love in more ways than one. I wrote this album over my 20-year career as a songwriter and performer; these were songs I wanted to keep safe; I wanted them to have a home in a collection. Several of the songs were written quite early on and have stayed with me over the years like a living memory, close to my heart. Other songs are newer and have come from a place of understanding. I hoped that the album would feel like a life journey and that you could also feel hope in it. Yes, these songs are a study in emotion, honesty and pain, and actually, not all the songs are from the same relationship experience. Still, it has been a journey through the struggles of intimacy and love. There is self-doubt, there is pain, there is longing, but there is also joy, imagination, courage and wonder. There is deep feeling, and there is acceptance. In the end, we make our own choices, we learn from them, and we grow. We experience what it is to be human, and we come to accept who we are. This is Okay, Alright.

On the making of “Okay, Alright”

From its inception, the recording of this album was a unique and very intimate experience. I went in with an utterly open-minded attitude and faith that magical things could happen if the right people were involved. I wanted to work with the best and with people I had an intimate and emotional connection to as this is my most passionate and heartfelt collection of songs to date. The songs span what seems a lifetime and, indeed, my entire professional musical career. Twenty years of songwriting condensed to the 12 songs plus one cover that not only seemed to connect and tell a story but also were the songs that have lived inside me like a secret whisper, never fading from my heart. These songs were songs that Peter, Howard and I chose individually, we selected twelve out of twenty nine-demoed pieces, and somehow we all agreed on the same group.

I was adamant in producing it myself as I had a definite vision of what I hoped to achieve here, and yet the two-year process evolved into a beautiful team of three, where we bounced ideas off each other and were all present at every turn.

Working with Peter Moore was an experience I will never forget. He is incredible in every way and brought things out of me that I didn’t know I could access. We recorded the album in high definition; Howard Gladstone, who prodded me to record these songs, was my rock and my driving force. He was steadfast in his support and his belief in what we were doing.

I wanted the songs to feel like an intimate conversation, the piano and vocal, how I sing them with their natural rhythms. I wanted the songs recorded the way I wrote them and how I perform them solo on my piano in my living room. I recorded the piano and vocals first and afterwards brought in George Koller and Marito Marques, both who have performed with me extensively, to add their magic. Together they indeed created a whole universe. Noah Zacharin, a longtime performance partner and co-wrote Hilton Head with me, added guitars. Tony Quarrington contributed additional guitar on Imagination and composed the beautiful string arrangements performed by Kevin Fox on Cello, Anne Lindsay on violin, Charmaine Lewis on viola, and Graham Mansfield on mandolin added the sparkle on the snowy So Cold.

I am very proud of what we achieved. The songs live together and apart. This album is a musical diary and, for me, a soundtrack of my life over the past 20 years.
I hope the listener can feel what I felt when I wrote these songs.